The Triumph Herald Convertible circa 1964

FROM RUST BUCKET BACK TO CLASSIC

It takes a person with a keen eye for car restorations to realise the potential in an old heap of rusty panels resembling a car, laid up in the owners back yard and overgrown by weeds, and what most would consider fit only for the scrapyard.
Not so for Don Sainsbury, who is currently nearing completion on his own 1984 Mercedes 500 SL convertible. Having seen the details on the club's newsletter for this month, he investigated further and went along to Tala with other club members to consider the possibility of its transformation back to former glory.
Over the course of the next few months, we will be chronicling the progress by way of technical data, anecdotes and photos. The next step is to relocate the car to Choletria. 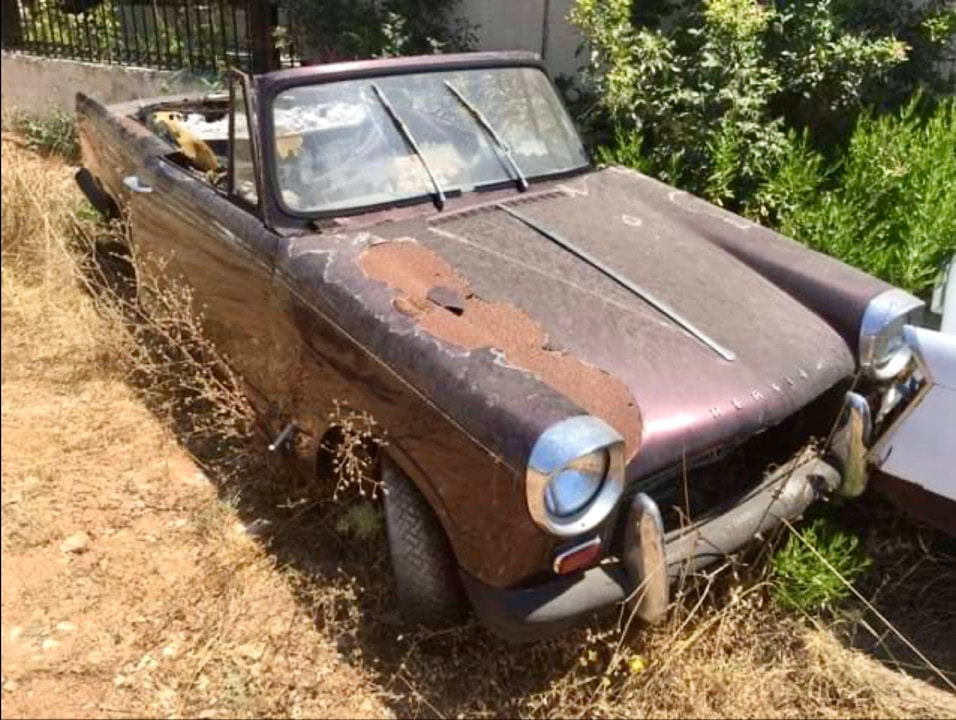 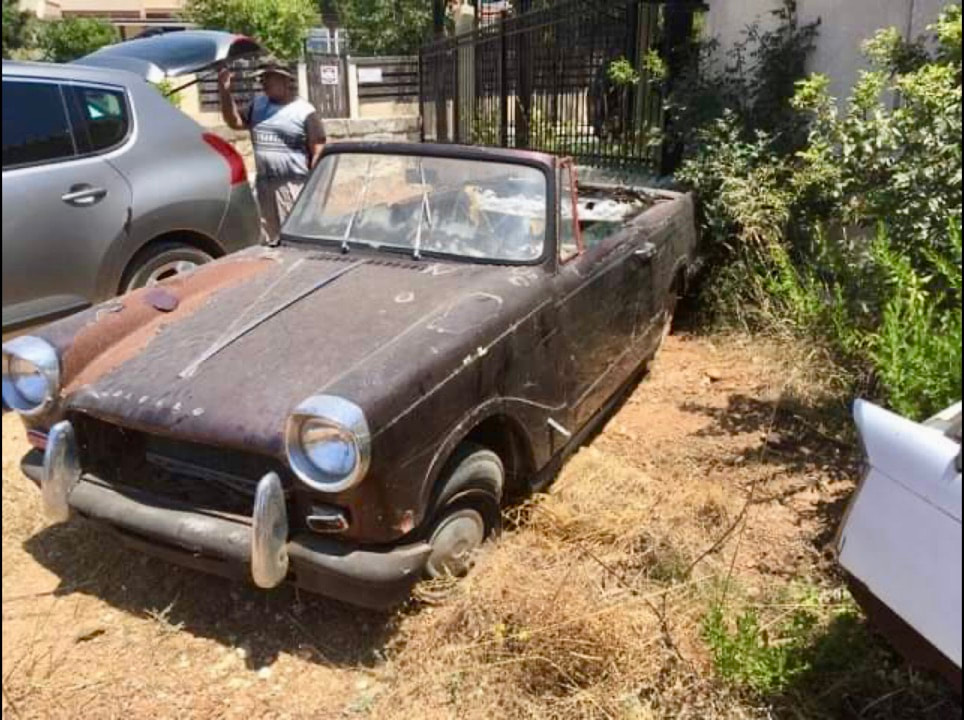 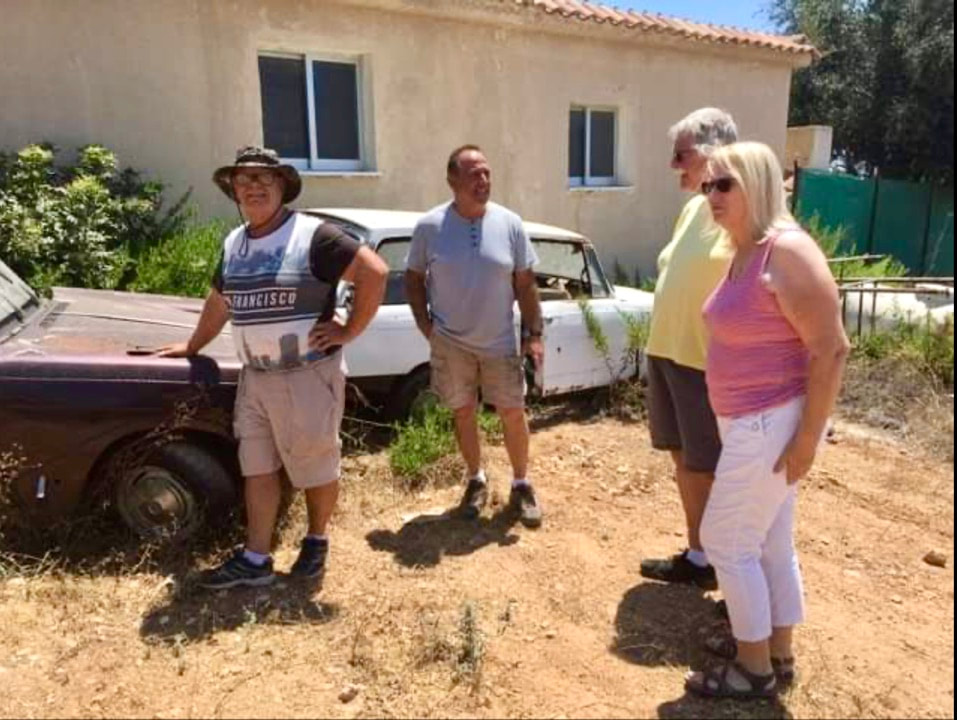 With time running out to save the two Heralds, Don arranged to meet up with a recovery vehicle in Tala and we then followed directions to the location of the two classics. Unfortunately the directions were erroneous which resulted in a small convoy of two cars and a truck wandering around Tala until we were rescued by Richard and Sue.
Having  located our quarry we set about loading the first car onto the transporter. This went more smoothly than we had anticipated and we set off to its new home. Getting it off the trailer was more complex but was achieved by towing it off with a Hummer!
The process was then repeated with the white car which proved more recalcitrant both getting it on, and even more so, off the transporter. This required interesting manoeuvres from the 4 X 4!
Now at their new home, the cars look in quite a sorry state but Don recons at least one (the convertible) can be salvaged by stripping the second one for spare parts, and he is keen to get on with the next part of the story.
But before we could do any more we had to rescue the recovery vehicle which had flattened its battery and would not start. Fortunately a quick jumpstart from Lee and he was on his way

Posted 22/08/2020 and written by Don Sainsbury
Hi all,
So after one transport day to collect and re locate the cars to our place. Thanks to Lee Chillingworth and Tony Singleton for the help with that one.
A day of research that revealed that Herald estate was actually a badly deteriorated estate body with a saloon commission number and no chassis number or documents consigned that one to spares source. The other, a documented saloon chassis with a convertible commission number.
Well, we can forget concourse, but can look at a good condition little Herald Convertible classic. The numbers date it at about 1964, and it will be a good car.
Day one of the task involved Tony Singleton and myself dismantling the donor car, on day two Lee Chillingworth joined us to assist in the process of dismantling and responsible disposal of the scrap elements.
On day three, Tony once again joined me and we got the convertible dismantled.
We are now working our way through what remains, things are looking good. Between the donor car and the subject of restoration it looks as if we have a a large number of serviceable items that will require little effort to re cycle. One engine is seized solid, the other lacking compression. Either way dismantling is required, looks like we are going for the 13/60 engine.
The subject car has a drum brake front end, the donor a disc brake set up. This is going to be a usable classic, that means we have gone for the discs.
Work is about to start on the chassis rebuild, once that is completed it will be time for the transmission, then suspension and finally the brakes.
We are going for a minimum cost restoration, that requires maximum effort and lots of e bay.
If anyone would like to visit, pick up a spanner or just pick up the phone feel free! Lots of experience is coming into play on this little car.
So far, €130 for moving the cars a €9.50 for some cutting discs. Lots of WD 40 and release fluid made from an oil/petrol mix.
A bit early, but pondering colour scheme of finished car in circa 1964 scheme, and photos or Triumph publicity documents welcome. 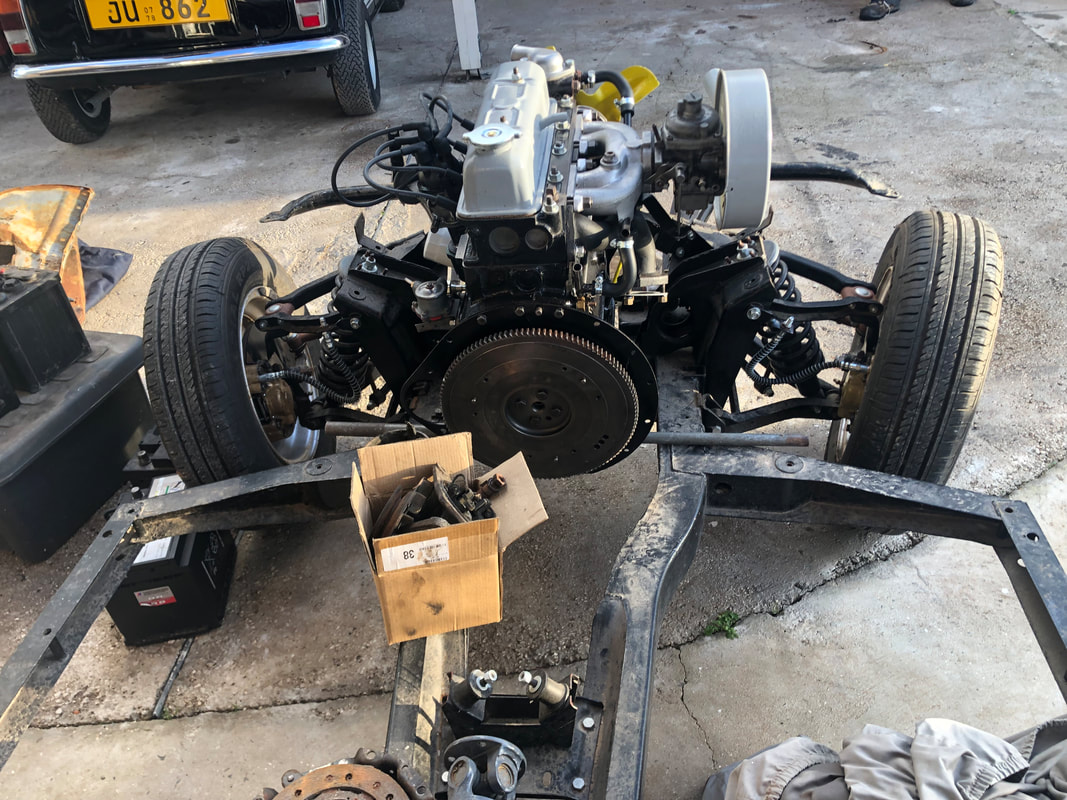 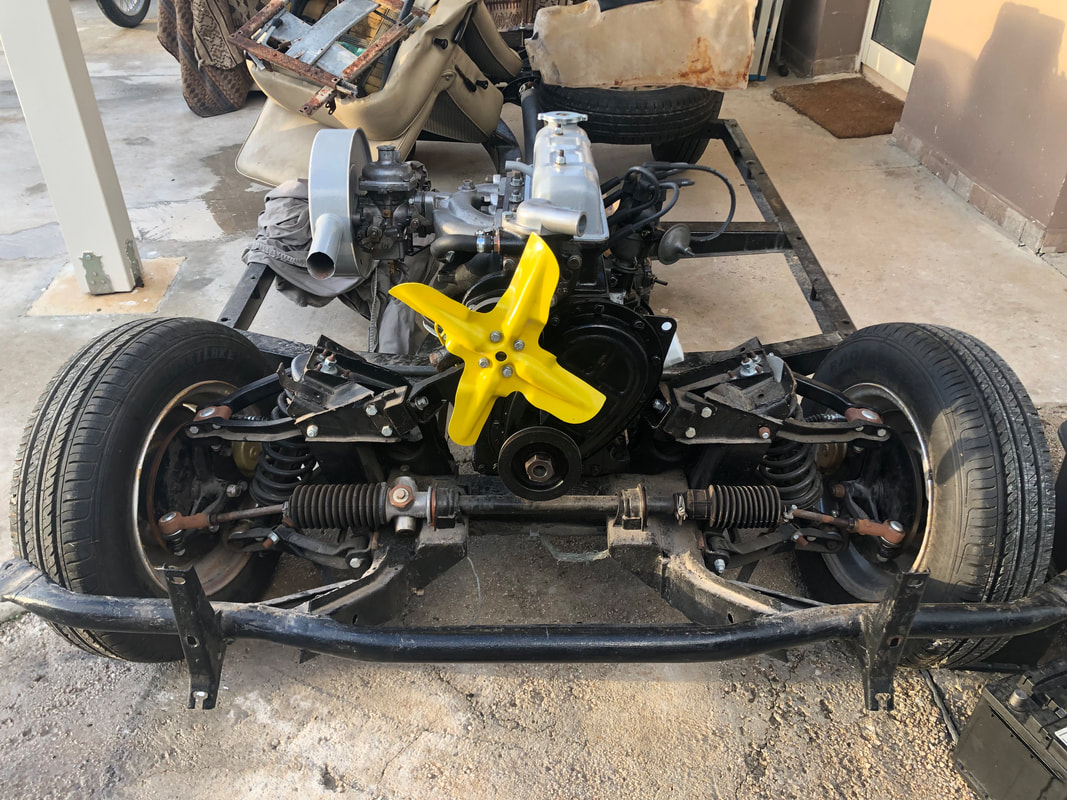 I live in Tamworth in Arden near Stratford on Avon and am a member of Bromsgove MGOC .
I have rebuilt the car in the photos from the body up again after an original rebuilt by the original owner as I felt it did not do the car justice.
The first photo was taken in my garden the second in my workshop and the third was taken at the end of sept when we as a club attended the Yorkshire Pudding Run based near York and toured the North Yorkshire moors.
Although the car may look concourse I have covered over 8,000 miles in the last 3 years including trips to France and Belgium including  driving non stop from Bruges to Stratford on Avon. The car is an 1959 MGA 1600 and has Type 9, 5 speed gear box which allows it to cruise at 70mph on motorways .

I have a villa in Neo Chorio near Latchi  I tend to come out to Cyprus 4 times each year.
Regards
Mike Storey (guest member of PCVC) 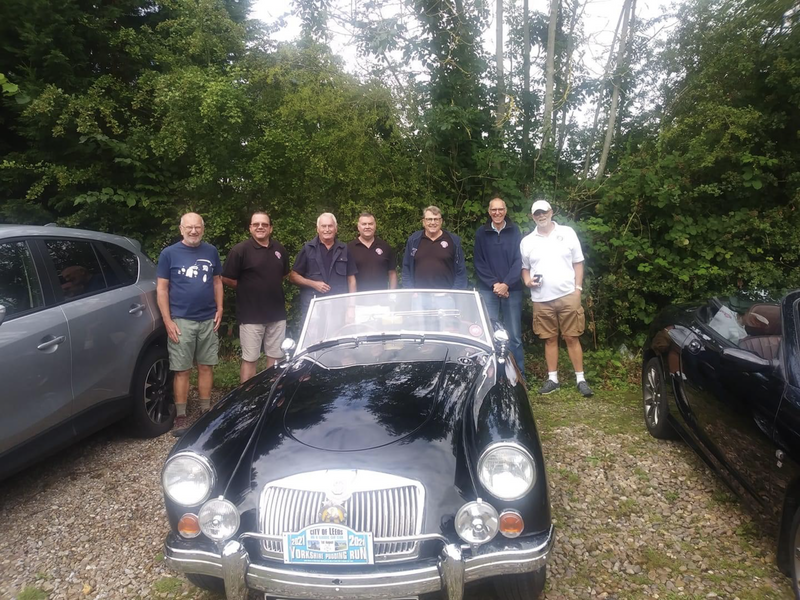 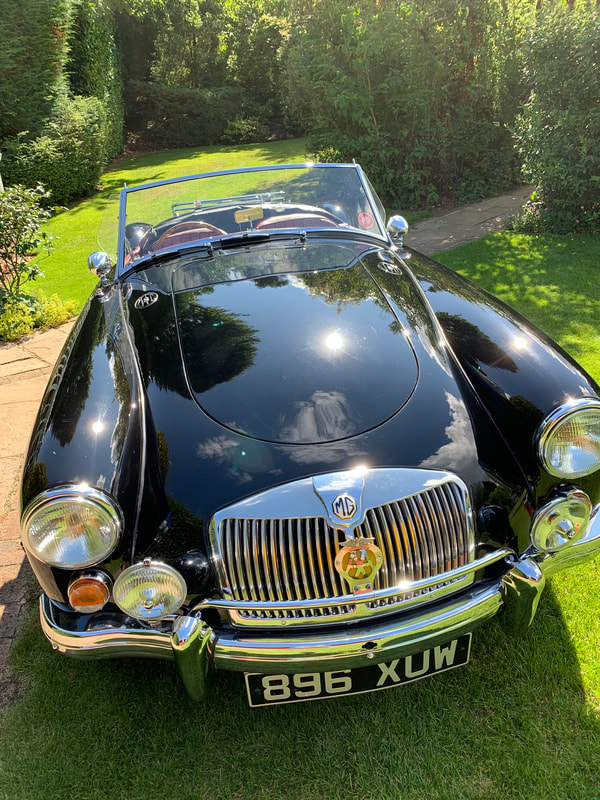 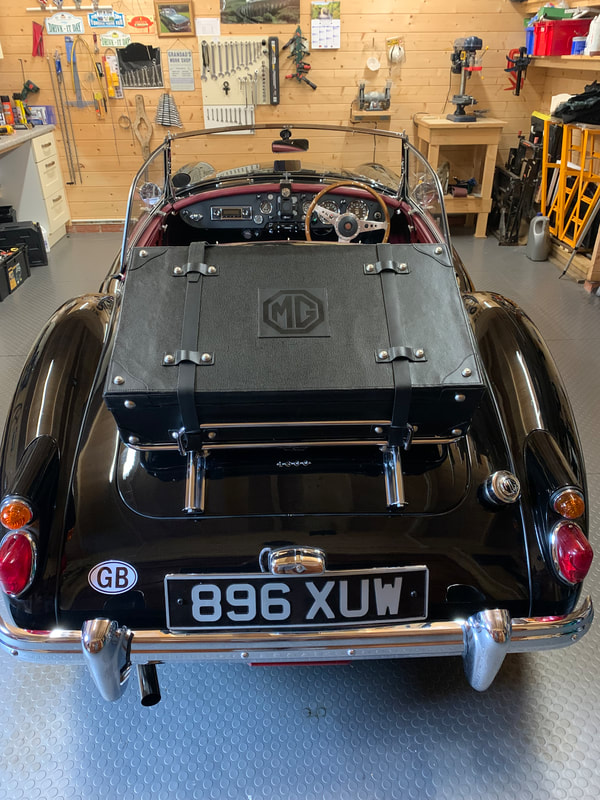 Club members Derek and Esthe from South Africa, in their own words, "The lockdown was good insofar as it gave  us time to progress on the restorations."
Below are the 3 photos of the three "builds", and further down are the more detailed staged progress of the vehicles.
Below are photos of the various stages of the Daimler restoration project and the more detailed stages of the bonnet's fabrication. 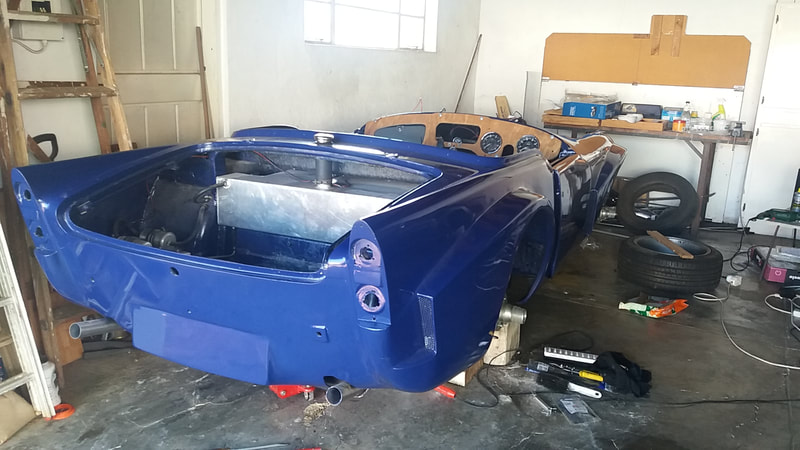 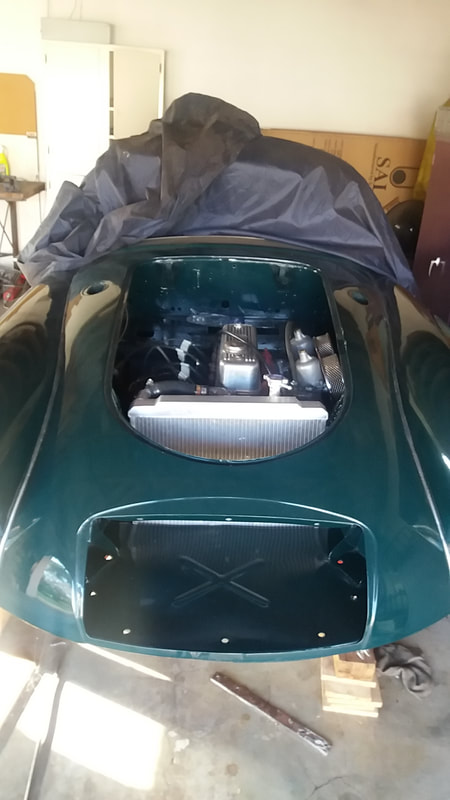 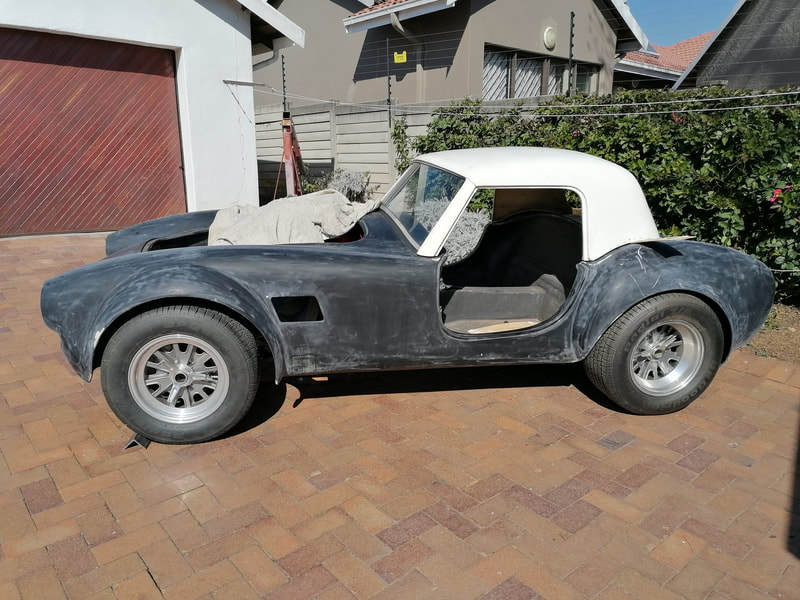 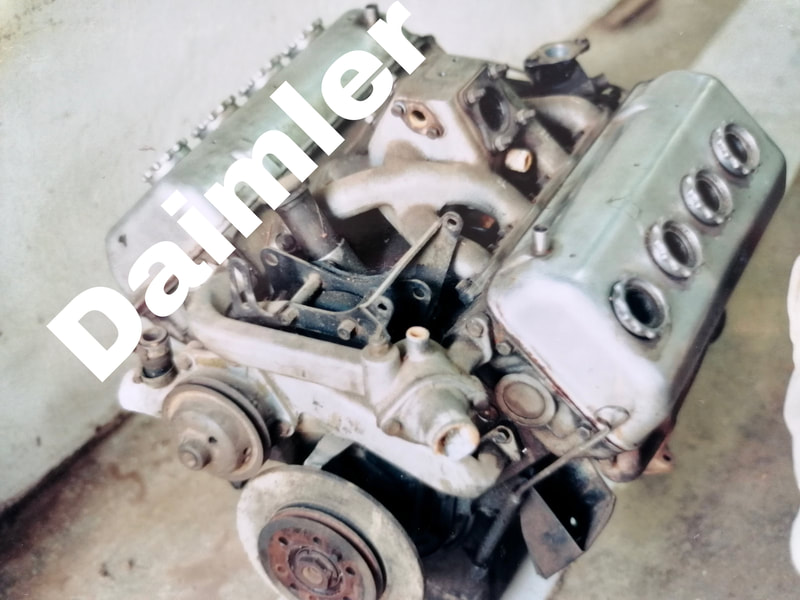 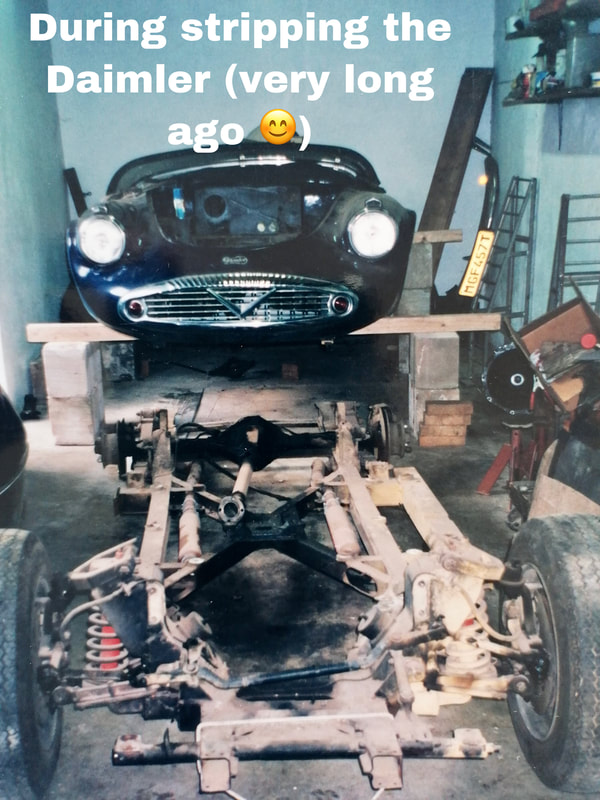 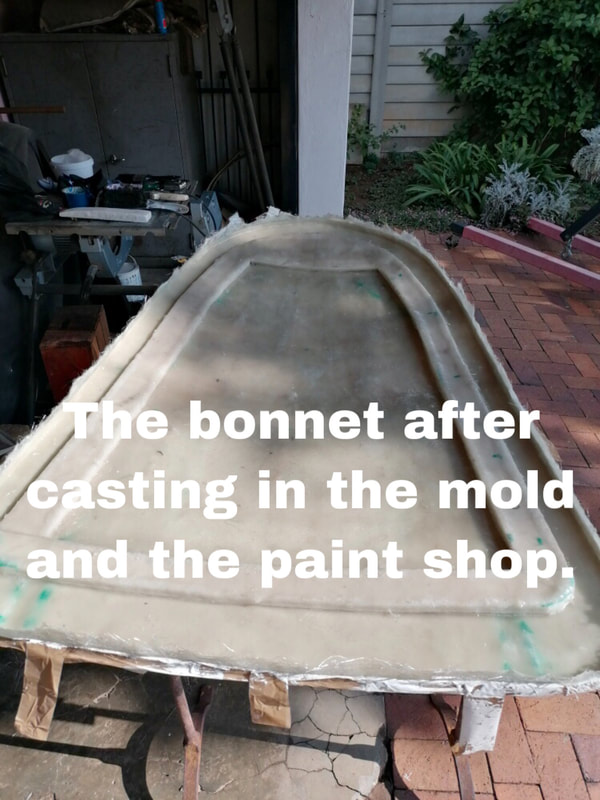 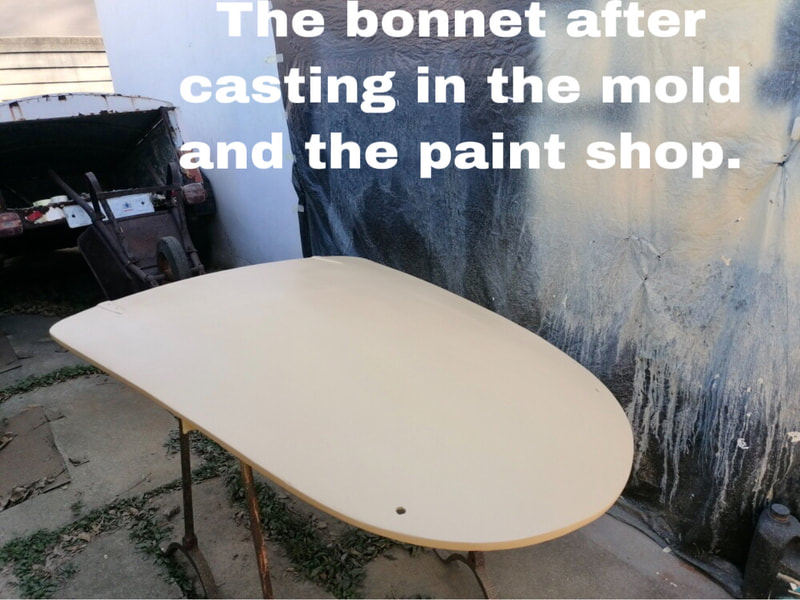 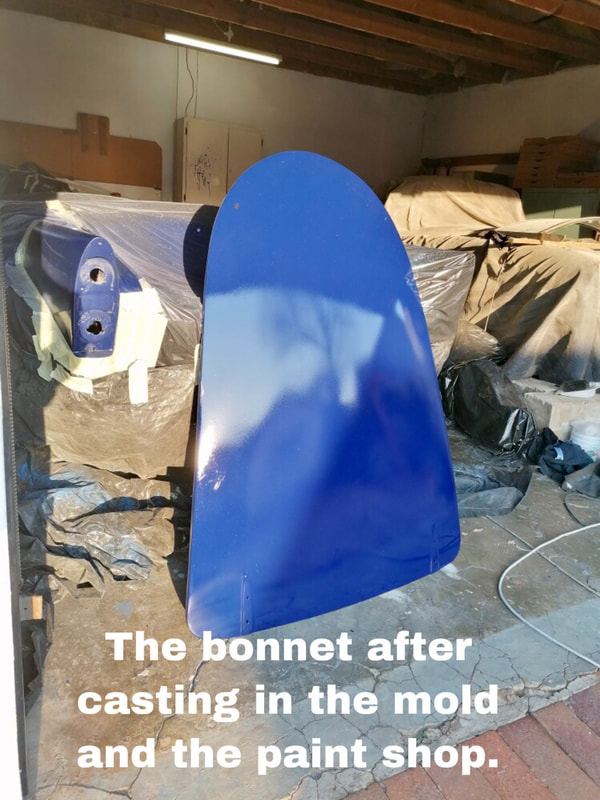 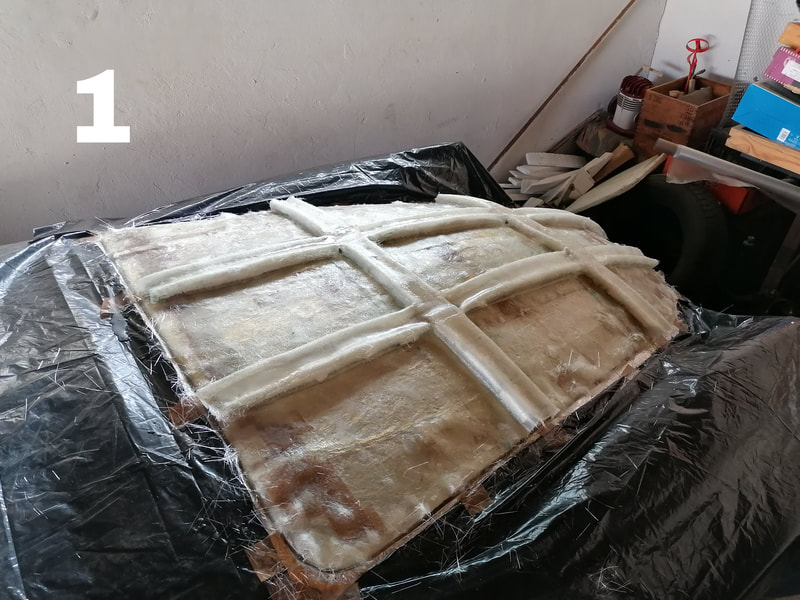 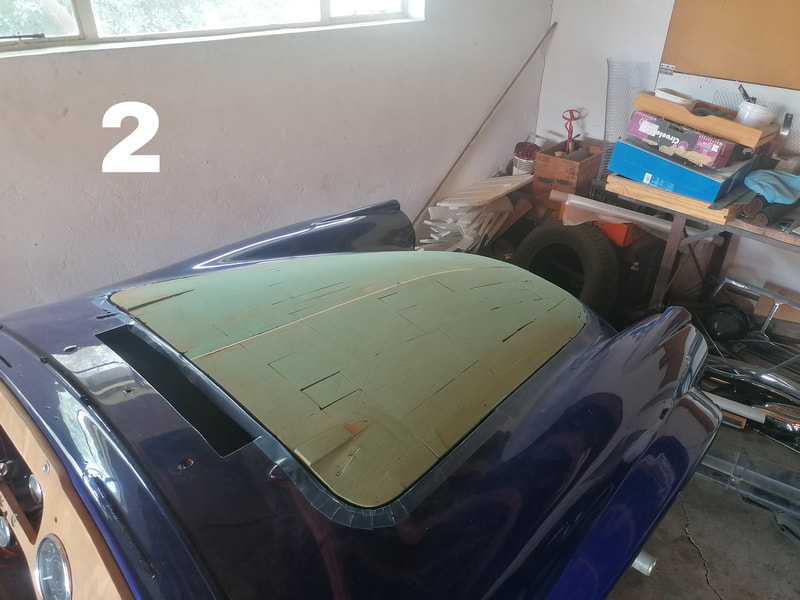 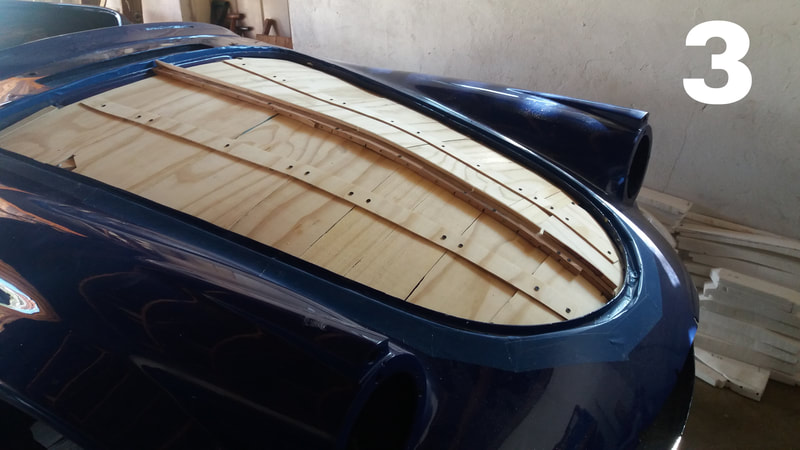 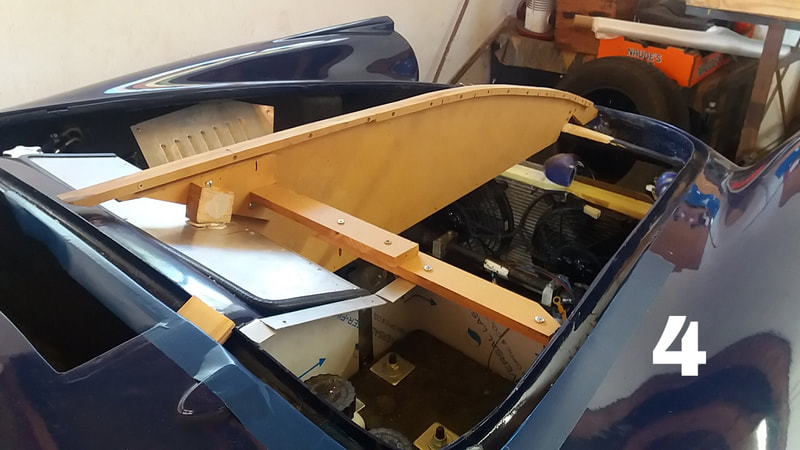 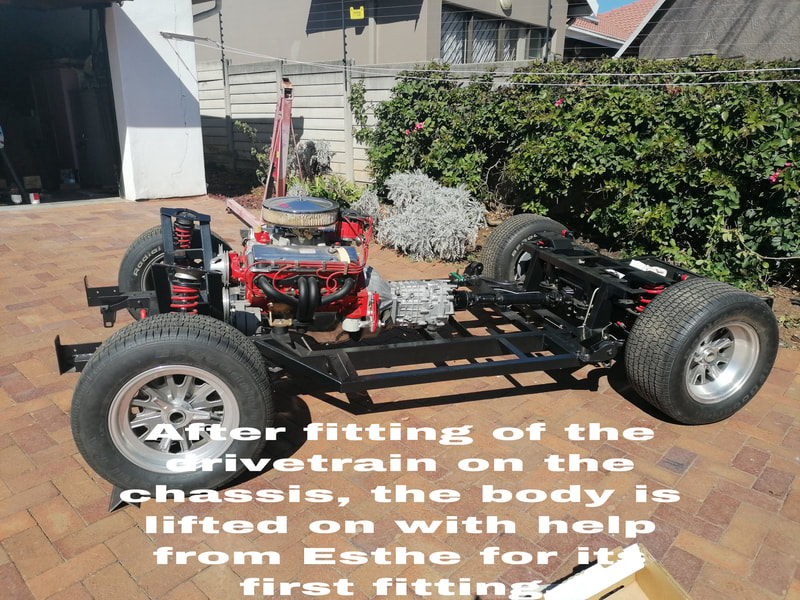 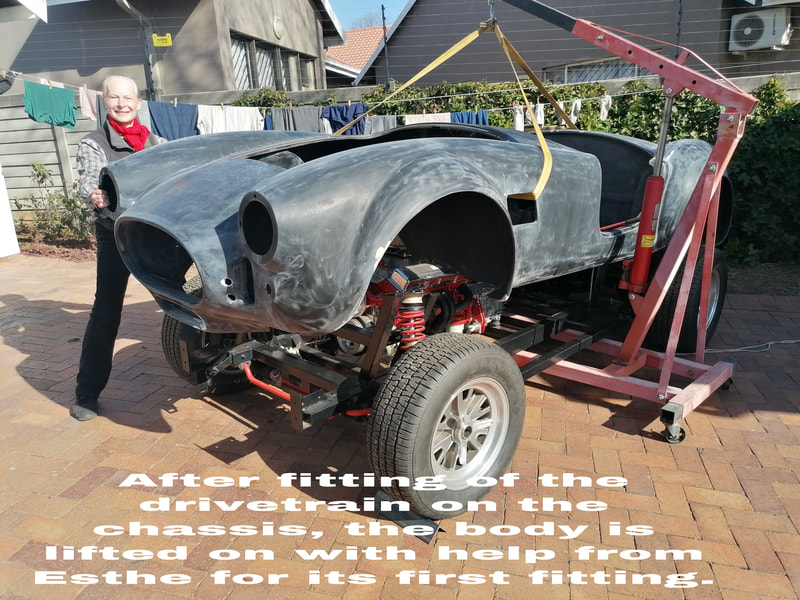 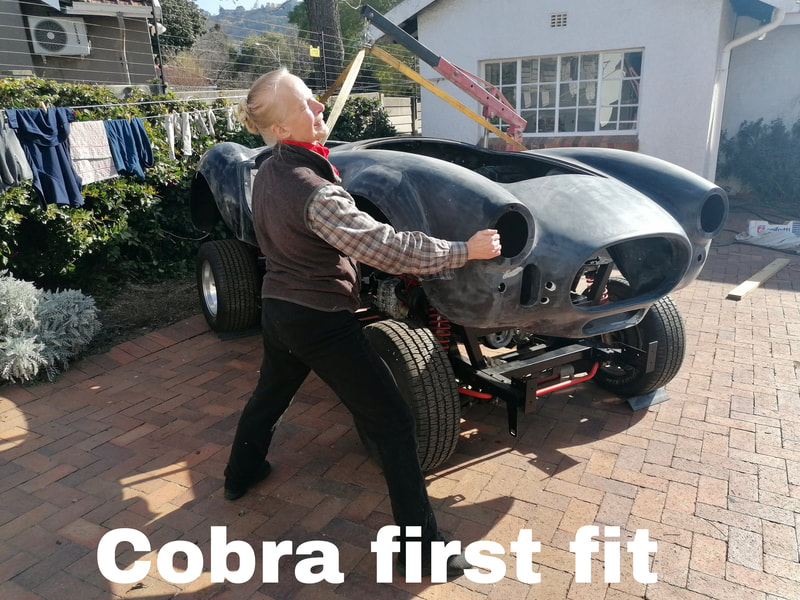 Club member Chris, already featured under our Readers Rides section of the website, took club members Don and Trish to his underground garage somewhere in Nicossia, to further arouse our interest in his dream project, his motto being "to have fun through this fascinating selection of restored, or about to be restored vehicles,  and to create a positive impact on people.
This certainly resonates with the general ethos of our own Paphos Classic Vehicle Club.
The project as you can see from the photos below is still under wraps however, but what he told us of his plans will certainly add a unique dimension to all classic car enthusiasts in Cyprus to one day experience at "The OLD GARAGE". Watch this space.
Written by Alan Holmes- The restoration of a mini 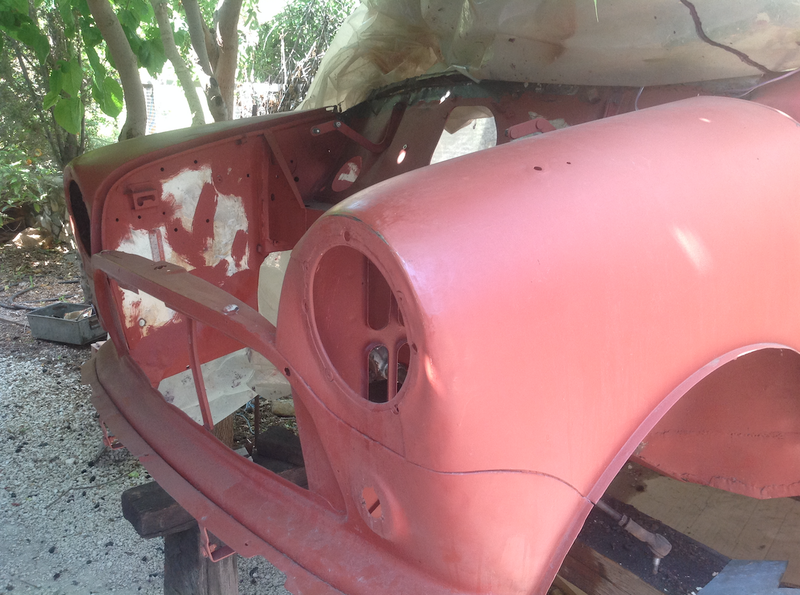 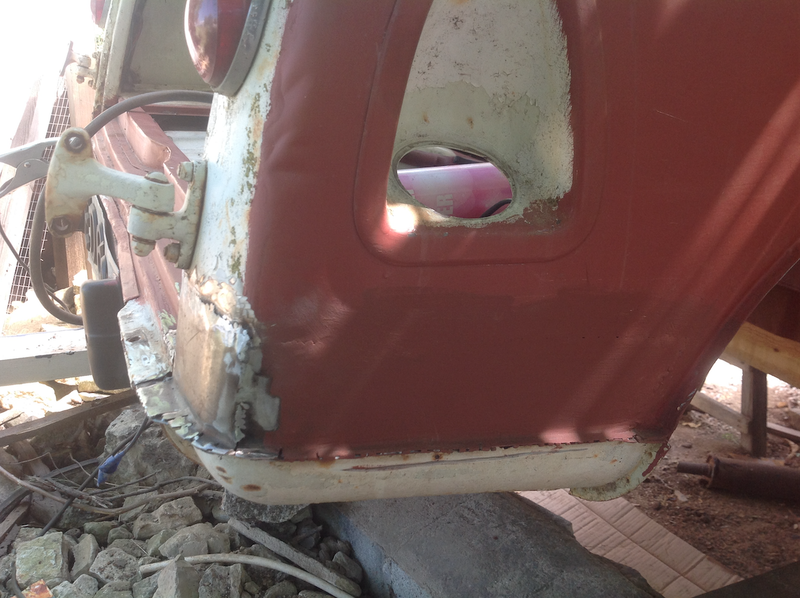 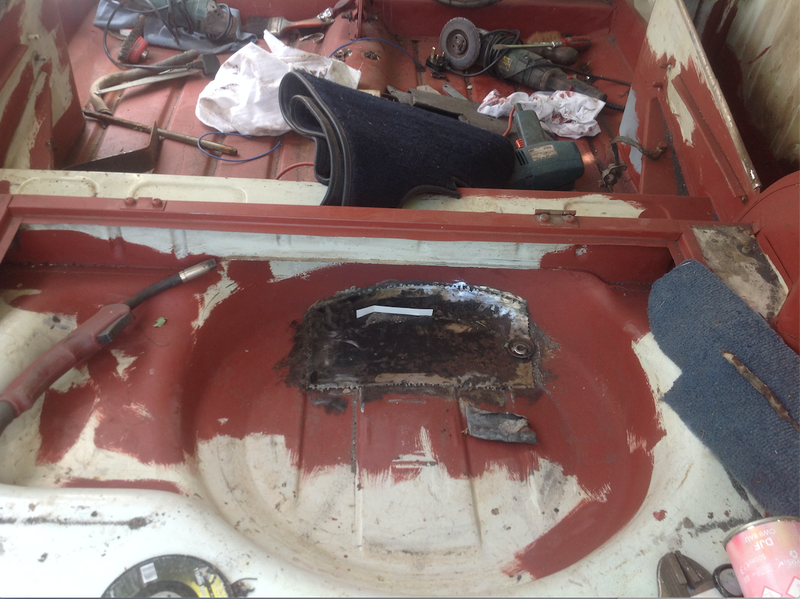 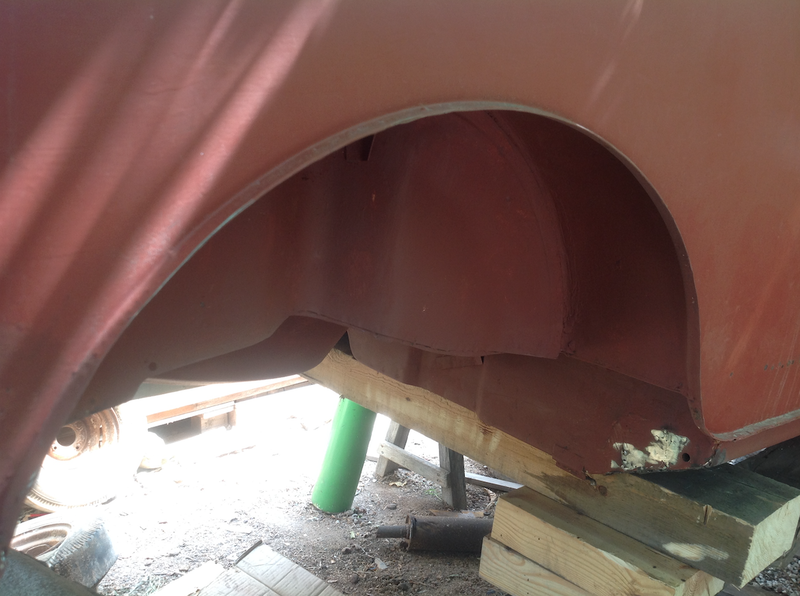 Thought I would take a few photos of my mini restoration, to show members that I have progressed.
New floors and cills and A posts, plus numerous other localised repairs like spare wheel compartment, and bottoms of rear panels near the rear doors, which have seen drastic surgery, bottoms, sides and tops, and lower halves of panels, repair/replaced .
Engine and sub frames removed, luckily all are without rust.
Engine I have had running and it sounds good, so won't rebuild.
What’s left to do?
Repairs to back edges of front wings, and the windscreen surround ( awaiting a good s/h section from the scrap yard I brought it from. It’s taking ages many excuses, and now we have a lock down, have got to wait )
Just arrived from England are 2 very good doors and a bonnet I purchased, which arrived part load in a container. Then it's refit doors and bonnet , order a load of mechanical bits and reassemble. Simple !!